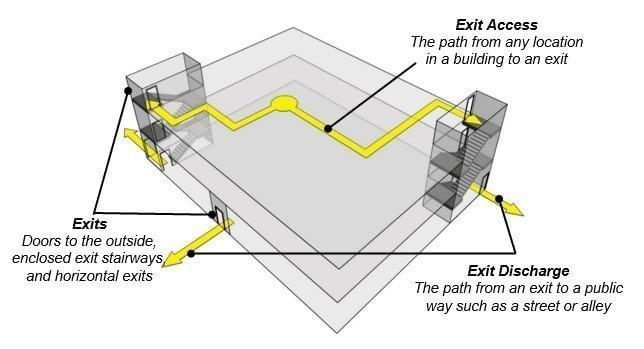 The means of egress requirements are part of the International Building Code (IBC) which refer to the ability to exit the building and the path to get outside. Every new building must have means of egress, but the number of means of egress paths and sizes differ from building to building.

What is means of egress?

A means of egress is a continuous, clear path from any occupied portion of a building, structure or space to a public way, such as an outdoor sidewalk. A means of egress consists of three parts: exit access, exit, and exit discharge.

A means of egress consists of three parts:

Are you looking for an IBC-compliant stairway?

Accessible spaces must have two accessible means of egress, and they are typically required to be no less than 36″ wide.

For Non-accessible spaces, which are floors above or below the ground floor, the accessible pathway must lead to an exit stairway, elevator, or horizontal exit. These areas serve as an Area of Refuge where emergency responders will come to help people in wheelchairs.

The required number of means of egress is determined by occupant load:

The exit consists of an exit stairway or elevator with standby power. The exit is separated from other interior spaces by fire-resistant construction. Refer to the IBC stair and handrail specifications sheet and the refuge areas to ensure your means of egress are compliant.

The exit discharge consists of either an accessible route, such as an ADA ramp or walkway, or a stair and platform with a refuge area. Can be inside the building such as the main lobby or outside to an egress court, courtyard, alley, or public way. A public way is defined as an area outside the building between the exit discharge and a public street with a minimum clearance height and width of at least 10 feet.